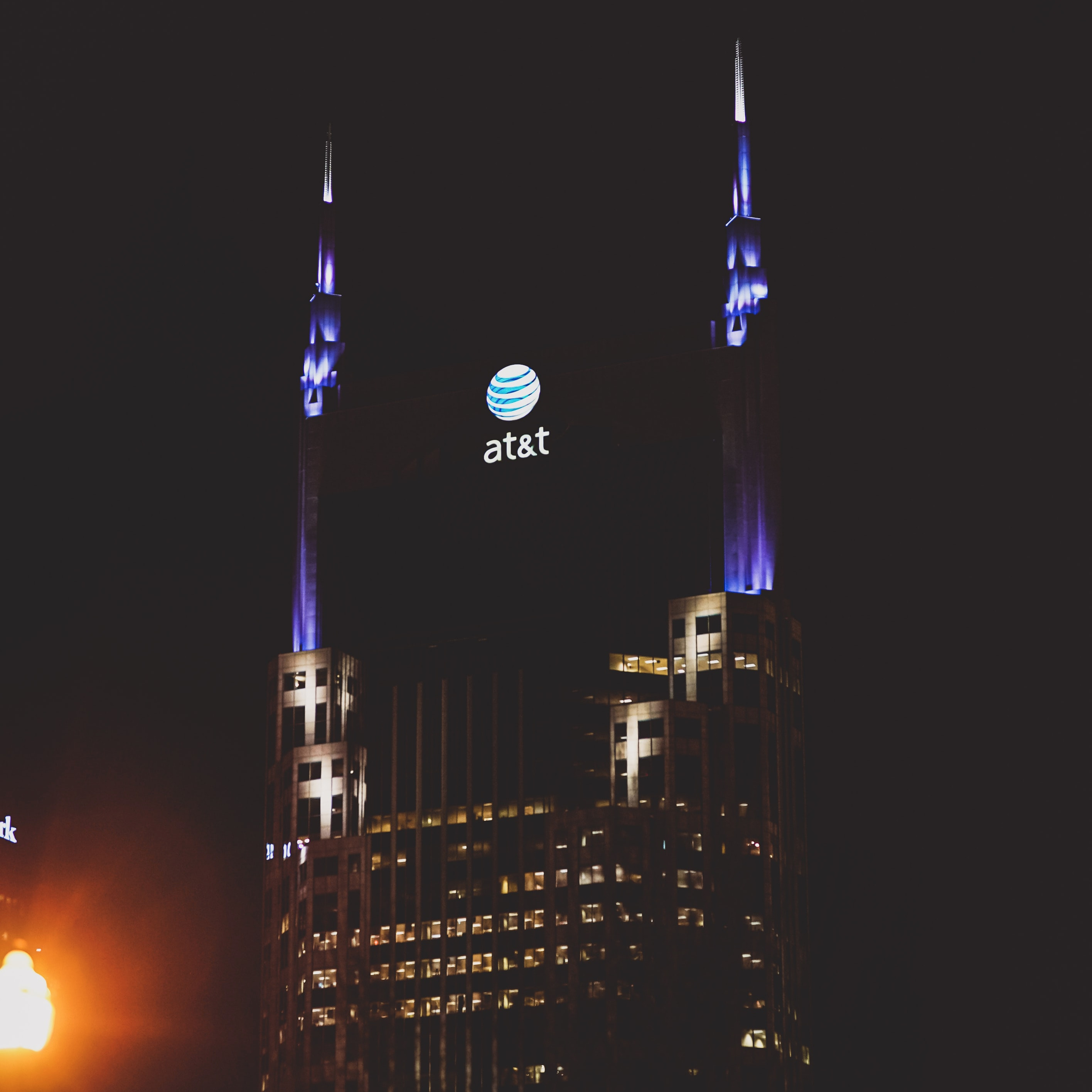 AT&T is a prominent member of the prestigious dividend aristocrats. Recently their heavy bets on entertainment have landed them in massive debts. We analyzed the company to find out how safe their dividend is.

AT&T is one of the oldest communication companies in the world. Founded 144 years ago, AT&T has revolutionized the way the world is connected through their mobile, entertainment, and connectivity areas. AT&T has been consistently increasing its dividends for the past 36 years and is one of the highlighted members of the prestigious Dividend Aristocrat club.

2013 - AT&T acquired Cricket to expand their consumer base by including prepaid mobile phones.

2015 - Acquired DirecTV for $48.5 billion which boosted AT&T to become the largest pay-TV network

AT&T communication revolves around the U.S. consumers. It provides AT&T services to more than 100 million consumers with T.V. services and broadband services. In addition to targeting individual consumers, AT&T oversees more than 3 million business accounts, with nearly all of the Fortune 100 companies utilizing AT&T business services. Recent technological improvements such as fiber secured connections, and smart mobile solutions brought in $142.4 billion in 2019. This sector can be broken into three sub-sectors that contributed to the revenue: mobile, entertainment group, and business wireline. AT&T was able to capitalize on its fast communication system to concentrate its resources in growing markets that, in the future, will need the most up to date connectivity.

AT&T acquired WarnerMedia for $108.7 billion. WarnerMedia was a substantial acquisition that landed AT&T in massive debt that prompted the resignation of Randall Stephenson from the CEO role. WarnerMedia is the parent company to hundreds of tv channels and entertainment titles that are household names. Some of the notable companies that are under WarnerMedia are HBO, Boomerang, DC universe, and CNN. WarnedMedia, like many of AT&T’s entities, is made of three smaller companies: Turner Media, Home Box Office, and Warner Bros.

Turner Media specialized in T.V. channels that cover sports such as the Bleacher Report and over 175 international networks. Home Box Office is one of the best-known media streaming services as it offers HBO NOW with groundbreaking original T.V. shows that have been recognized all over the world. The last branch of WarnerMedia is Warner Bros., which has brought in the most revenue under the WarnerMedia name. Warner Bros. has created many notable movies such as the Harry Potter series, Lord of the Rings, and D.C. movies. In total, WarnerMedia brought in $33.5 billion in 2019.

The second market that AT&T focused on was Mexico and South America. Central and South America are serviced by their third most largest division named AT&T Latin America. AT&T Latin America is centered mainly around Mexico, but their services do extend to South America and the Caribbean. Two of the services they offer are Vrio and AT&T Mexico. Vrio is focused on digital entertainment services that use DirecTV, Sky Mexico, and Sky Brasil brands. AT&T Mexico is strictly focused on the Mexico user base. In Mexico, AT&T is the fastest-growing wireless network that is quickly expanding to close down the digital gap experienced by Mexico’s residents. Together, Vrio and AT&T Mexico brought in $7.0 billion in revenue in 2019.

The last subdivision of AT&T is Xandr. Xandr provides premium options for advertisers and publishers that are looking to target niche audiences. Their expertise include data insights, premium content and powerful ad technology allow them to capture and improve how advertisements are created by publishers and consumed by users. In 2019 they were able to bring in $2.0 billion.

AT&T has set strict guidelines on what it aims to achieve in 2020. With 5G connectivity revolutionizing the way we envision connectivity, AT&T made it a priority to become a leader in this space. 5G connectivity is set to bring better connectivity to all the businesses and consumers that AT&T supports, which will result in better customer engagement and brand positioning within the American community. As a result of their acquisition of DirecTV and WarnerMedia, AT&T has increased its debt in a short amount of time. This can be a problem because as a prominent member of the Dividend Aristocrat list, AT&T is looking to reduce its debt exponentially to keep their commitment to supporting dividends for the future. The areas that they are focusing on are: labor costs, distribution, network operation, simplifying support functions, and increasing corporate rationalization.

To reduce labor costs, AT&T has closed over 250 stores and cut 3,400 jobs at different organizational levels. Targeting under-performing stores, AT&T can optimize their distribution channel only to keep the stores that not only bring in value to the corporation but to its customer base as well. Corporate rationalization is being implemented in all areas of AT&T. To further reduce costs, AT&T is going to change the way all their systems are working. From the call center to business sales effectiveness, they will all see incremental changes that reduce mundane expenditures and can bring in more revenue with lower costs.

HBO Max is a leading service for AT&T. 2020 is set to become a notable year for its streaming service. The HBO Max has had a tremendously successful launch, reaching over 36 million subscribers. AT&T has diversified the content that they support on the platform, which now includes iconic T.V. shows such as Friends and kid-friendly shows like Scooby-Do. The HBO Max launch indicated that users were upgrading their wireless and broadband plans and had the highest customer activation on AT&T platforms.

The following metrics are taken from the Q2 2020 Investor Briefing. We will split up the revenues and expenses by groups: US AT&T Operations, WarnerMedia, and AT&T Latin America. 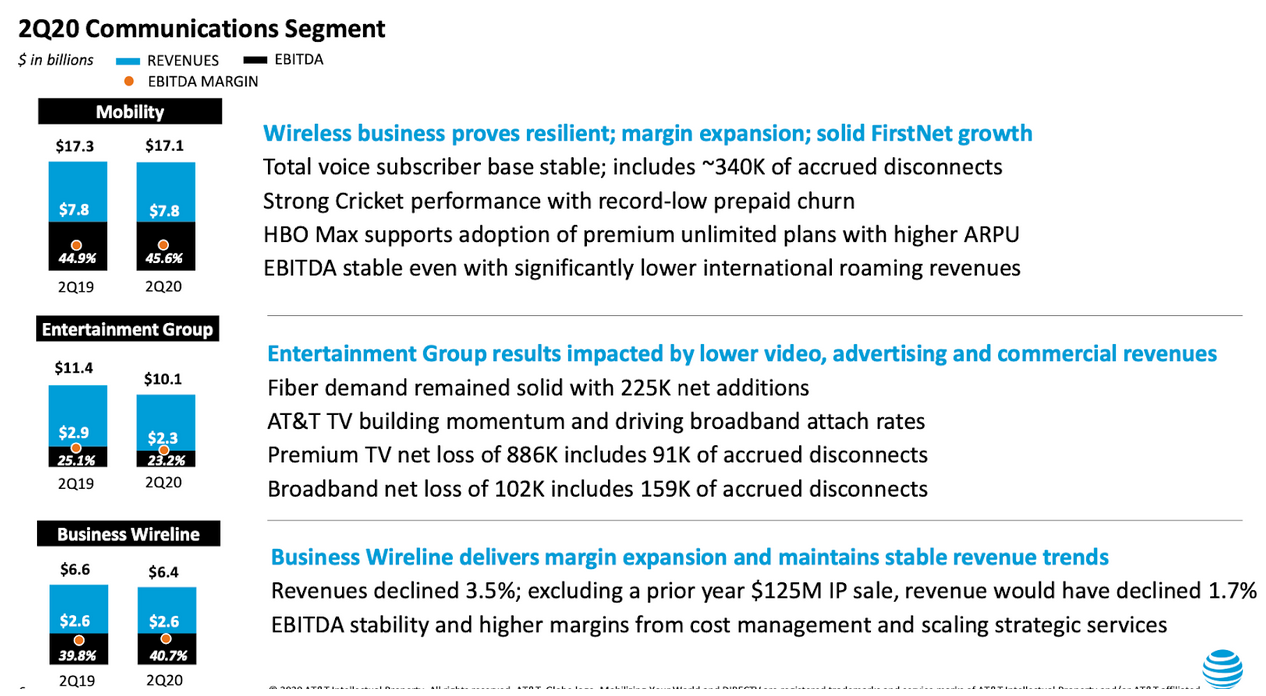 COVID-19 has impacted AT&T drastically. With their acquisition of DirecTV and WarnerMedia, they were anticipating an upswing in revenue from entertainment platforms. It is estimated that due to COVID-19 restriction, as supply chains condensed, AT&T has lost over $320 million to ensure AT&T mitigated the virus throughout its operations and compensated those working front lines during the peak of the virus. Sports getting canceled and movie theaters shut down obliterated production for WarnerMedia and its advertisement sector. Store closures also contributed to a significant amount of lost revenue as equipment sales tumbled, and it became harder to reach new customers. The second biggest market that AT&T is emerging in is Latin America, which now has a multitude of countries experiencing inflation along with protests. Unfavorable exchange rates with these foreign countries accumulated to AT&T’s lost revenue. A total of $510 million is estimated to be lost from COVID-19 pressure. 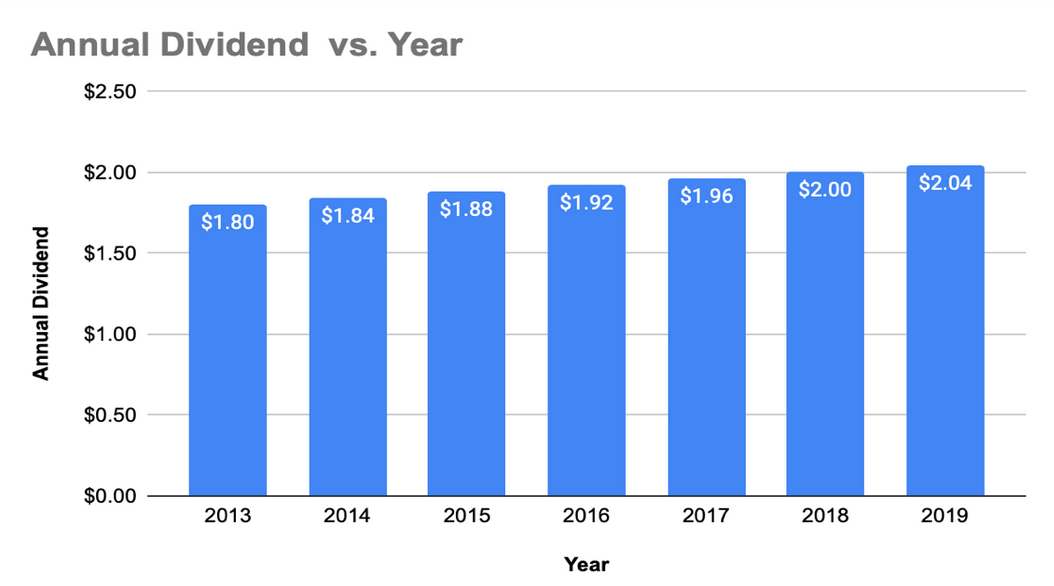 AT&T, for the past 35 years, has increased their dividend annually. Although AT&T is not regarded as a growth stock, it is a highly regarded value stock. It currently boasts a forward payout ratio of 65.46%. AT&T, as a company, is very committed to upholding their promise to the dividend investor and remains a role model for Dividend Aristocrats. 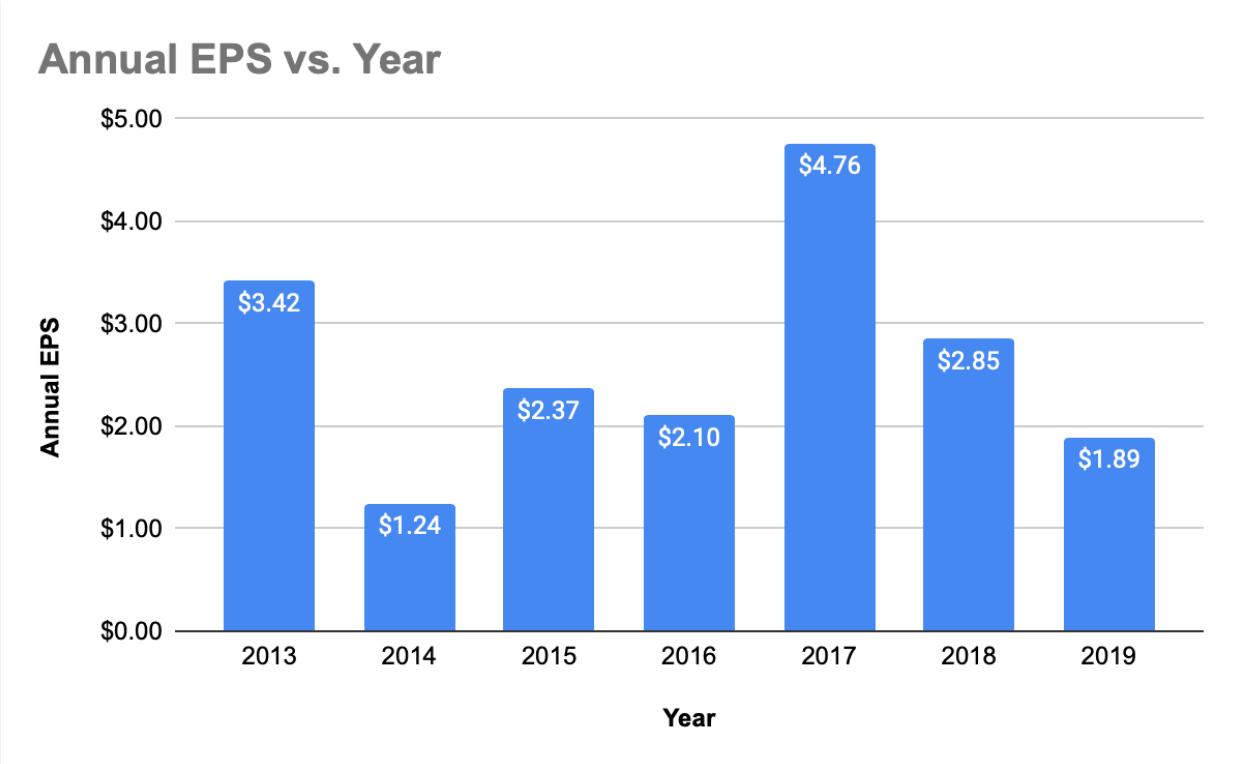 Earnings per share have fluctuated for AT&T. Aggressive merger and acquisition combined with changing consumer trends, has not created a steady pattern for AT&T. Although their business model is continually evolving to accommodate new consumer trends, AT&T is set to take a hit in 2020 as COVID-19 is impacting many of their revenue streams. 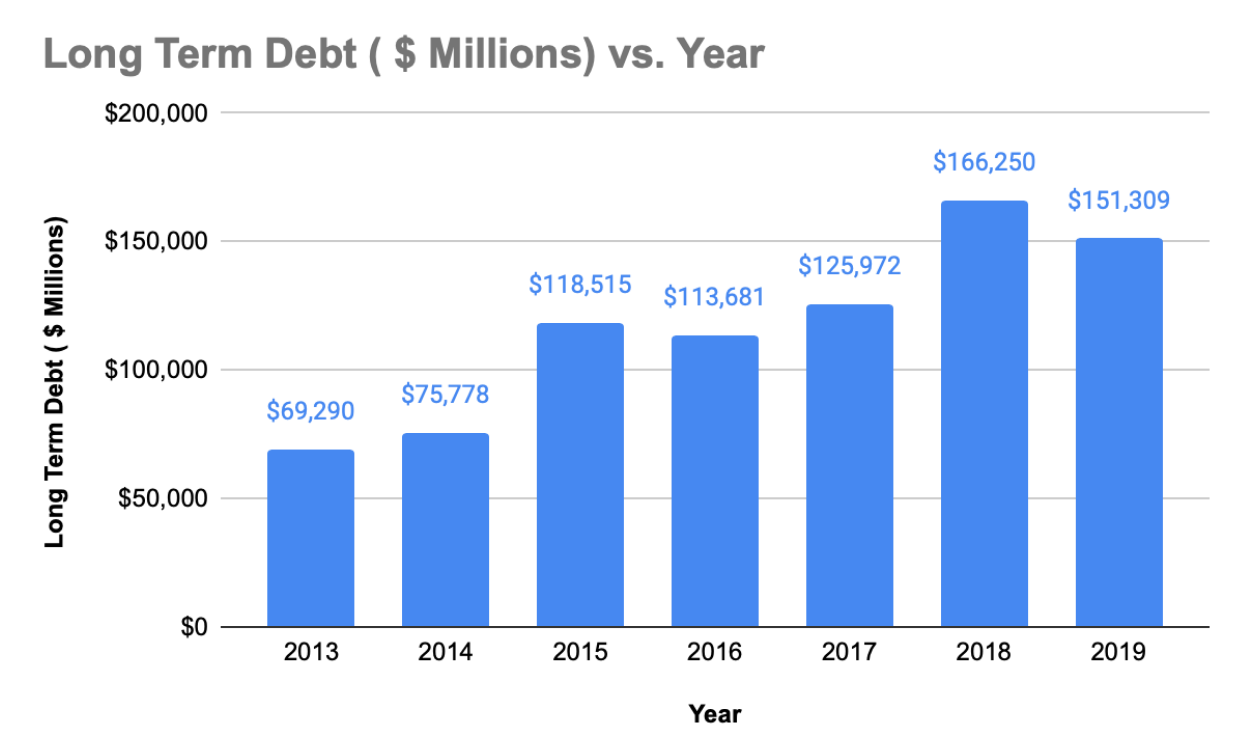 Aggressive mergers and acquisitions have created a tremendous amount of debt for AT&T. As consumers move from the traditional T.V. subscriptions to online streaming services, AT&T  launched multiple products to compete in this emerging market. As AT&T introduced HBO MAX, AT&T U-Verse, and DirecTV, they hoped that they would see a massive influx of new users.Instead they’ve failed in gaining momentum in this fast-paced environment.

To refinance some of their debt, AT&T opted to hold bond sales totaling $12.5 billion that would be due starting 2027 through 2060 with interest rates ranging from 2.85% to 3.85%. This bond sale was used to repay $5.3 billion. Although AT&T has very high debt due to mismanaged acquisitions, the board of directors is committed to improving its credit rating and, most importantly, keeping its dividend commitment.

AT&T has been a favorite for a dividend investor. Although it is not seen as a growth stock, for the past three decades, it has held its commitment to increasing its dividend annually. Debt is one aspect of AT&T that has drawn much attention lately. The company’s views on streaming drove it to indulge in aggressive mergers and acquisitions, which, due to COVID-19, have not gone as expected. Depending on the length of the virus, AT&T will suffer as their revenue streams have been drastically cut in entertainment. Changing consumer behavior is another major area that AT&T seems to be struggling with. As more people move away from traditional cable and join the online streaming platforms, AT&T has not kept up with its rivals. AT&T is positioned to incur more losses, but with the bond sales and early loan repayments it’s been conducting, we can see things getting better in the long run. It promises to dividend investors will most likely be upheld as the board of directors, and managing partners do understand how crucial the dividend increases are to their investor base.