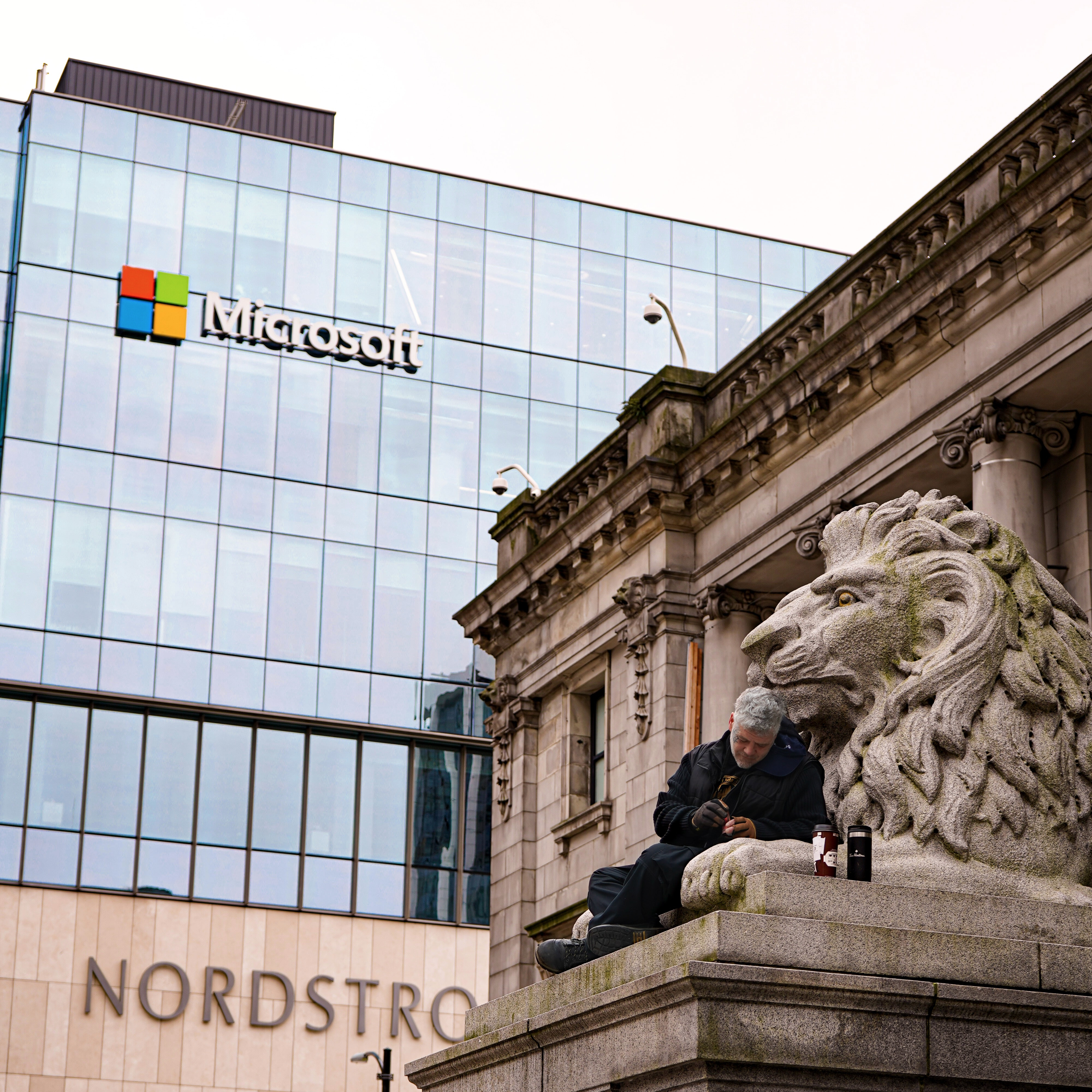 Ever since February 4th when Satya Nadella took over Microsoft, investors have reaped the gains as they shot up from $36.97 to $210.70 as of July 6th. Since he’s taken the reins the company has seen drastic changes in it’s stances on open source, company culture, and core business. To see a monolithic organization like Microsoft make this radical transformation and adapt to the times is exciting as it proves they are willing and able to position themselves as a leader in uncertain times. Given these drastic changes, Microsoft has and continues to be an exciting company to invest in if you want growth, and some dividends along the way.

To control the office of the future, companies must look toward ways of owning the remote office. Microsoft has positioned themselves as a dominant force in the remote work environment by leveraging existing tools and building a suite of new ones that empower the next generation of workers. The massive user base of Microsoft Office (155M users) is going to be the starting point for their future expansion into remote technologies.

It’s no secret Microsoft and Slack haven’t on the best of terms. The CEO of slack penned an open letter to Microsoft welcoming them into the communication space, encouraging them to build a better project. Largely symbolic, the letter demonstrated how nervous Slack is to compete with a corporation known for devouring smaller companies. Microsoft Teams has already overtaken Slack in the total number of daily active users, and has shown continued signs of growth throughout the industry. For Slack investors, this is concerning as Microsoft has also bundled their office suite with Teams, further improving the value of the product.

The core business of Slack is their messaging application, while Microsoft has a diversified range of services, and spends almost as much in R&D (16.9B) as Slack is worth (17Bn), allowing them to own the corporate messaging space for years to come.

Next to Clorox, Zoom has been one of the biggest beneficiaries of the cultural shift in how we work. Their stock soared as their video conferencing tool has become the core tool of remote workers. Unfortunately for them Microsoft has taken notice and integrated video calling into Teams. Comparable in feature set, Zoom has also suffered from security issues that may hinder them on their path to greatness. Zoom will continue to be used by remote workers everywhere, but it is unlikely they will be a leader in the video conferencing space as Microsoft Teams can count 90% of the fortune 100 as their clients

During the past decade talk of the “cloud” slowly turned from funny corporate jargon to a multi-billion dollar market. The leader of the pack in cloud computing was easily Amazon as they built and provided AWS to the largest tech companies in the country. While Azure is merely a fraction of the size of AWS, they have a few things going for them.

In a highly contested fashion, Microsoft was awarded a $10bn contract from the U.S. Department of Defense to provide Azure services across the entire department. A massive revenue opportunity, this contract was recently put on hold through a lawsuit by Amazon. It is unclear at this time whether the contract will fall through, but at the very least it gives reputation to Microsoft as one of the leaders in the computing space.

While much smaller in size than AWS, Azure and Microsoft can boast about their existing devtools, PaaS, and integrations with developer platforms. While these developer centric tools may seem unrelated, they are incredibly valuable in building up long-term goodwill with the developer community. As IT professionals determine which infrastructure will serve their organization, they will advocate for the tools and technologies they are familiar with, and Microsoft tends to control most prized tools for technology professionals everywhere. A few companies that have chosen Azure over AWS are: Ebay, Travelocity, and BMW.

Before the massive crash in the market in mid February, Microsoft was trading around $188, but as of now it has recovered and seen it’s price drastically rise ($210.70). Their earnings have been strong, as Covid has had a minimal impact on their core business. They have actually seen an opposite effect and have had large parts of their business grow as more people move toward remote work. 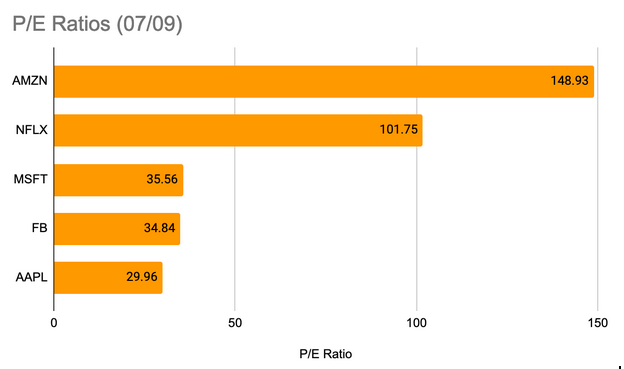 The current P/E ratio for Microsoft is sitting at a healthy 35.56. For comparison Apple and FB have P/E ratios of 29.96 and 34.84 while Netflix is 101.75 and Amazon is at 148.93. Compared to the other tech giants, only Apple can compete with Amazon with both it’s tremendous cash pile and enticing P/E/ Ratio.

The worst of Covid-19 might have not hit us yet. It is very possible that there is another shock in the market from rising cases and slowing business activity across all states. While some companies have gone into M&A mode already, Microsoft has yet to make any major moves with their capital. They are well positioned to weather the worst of the next shock, and challenge the competition as they struggle to survive.

Whenever cash piles too high, shareholders begin to ask companies why they are sitting on all that money when they can use it for dividends? Steve Jobs famously opposed Apple paying a dividend, but the shareholders eventually won and now Apple pays an annual dividend of $3.28 per share. As Microsoft’s cash piles up they will either have to make an acquisition, increase dividends, or both to appease the unruly shareholders. It is not improbable that a company with this much cash and this strong of a competitive moat will begin to increase their dividend in the future.

Microsoft has been paying and increasing their dividend since 2003. Their 3-year growth rate sits at 9.36% while their 5-year growth rate is at 10.51%. They currently have a low yield (0.97%) making them a less attractive dividend producing stock compared to many REITs or banks. But their consistent, slow growing dividend payments combined with their massive cash reserves demonstrate that they are likely to be paying consistent dividends for years to come, with potential for more increases.

While it is more noted for their growth, Microsoft is still an appealing long term dividend producing stock because they have built strong competitive moats around their core business and expanded as necessary. They are on the lower end as far as dividend yield, but with strong cash reserves I wouldn’t rule out the possibility of increases to their dividend payouts in the near future.